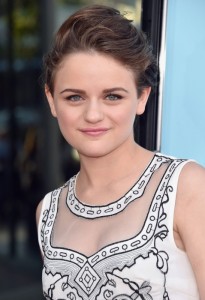 Joey King was born on July 30, 1999 in Los Angeles, California. In 2006, she made her professional acting debut on the TV series The Suite Life of Zack & Cody. The following year, she appeared in the movie Reign Over Me, though she was not credited for it. Around the same time, she played Amelia in the TV movie Avenging Angel. She next played a supporting role in the movie Quarantine. In 2010, she got her break when she landed a lead role in Ramona and Beezus.

In the 2010s, she continued receiving recognition as a child actress for her performances in Battle: Los Angeles, Crazy, Stupid, Love., Family Weekend, The Dark Knight Rises where she played the young Talia al Ghul, The Conjuring, and White House Down where she starred alongside Channing Tatum. She recently starred in the 2014 movie Wish I Was Here, as well as played Greta Grimly on the TV series Fargo.