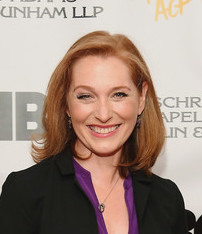 Kate Jennings Grant is an American actress. She started her Hollywood career in 1998, debuting in an episode of Sex and the City. That same year, she also had her first movie role in The Object of My Affection. In the 2000s, she mostly made one-time roles on TV with her first recurring role in Commander in Chief. During this period, she also had performances in such films as Kinsey, Trust the Man, Forgiven, When a Stranger Calls, United 93, Blackout, and The Rebound. In 2008, she portrayed Diane Sawyer in the film Frost/Nixon. She next appeared in the movie Love & Other Drugs. Later in 2014, she played Courtney Townsend in some episodes of Alpha House. She went on to star as Louise Herrick in the short-lived series Notorious.