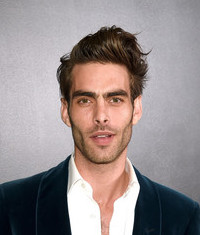 Jon Kortajarena is a Spanish model and actor. He’s a prolific fashion model who has appeared in several ad campaigns. He’s collaborated with such brands as Versace, Giorgio Armani, Trussardi, Diesel, and Lagerfeld, among others. He became further known when he modeled for H&M, Zara, Guess and Tom Ford. He then ventured into acting. He made his debut in the 2009 Hollywood film A Single Man. In 2017, he played recurring role Felix Cordova in the ABC series Quantico. More recently, he starred as Nicolás Vázquez in Netflix’s High Seas, as well as played Alex in Prime Video’s Tales from the Loop.