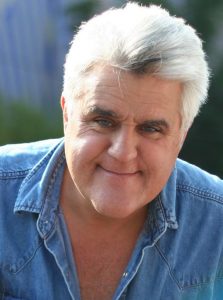 Jay Leno is an American comedian and TV host. He started his career in the 1970s, first appearing in the sitcom Good Times in 1976. He made his film debut in the 1978 movie Silver Bears. His major breakthrough came when he became the host of his own show The Tonight Show with Jay Leno, which started in 1992 and lasted in 2014. He has since appeared as himself in dozens of movies and TV shows. From 2009 to 2010, he also hosted The Jay Leno Show. As of present, he hosts Jay Leno’s Garage. He’s also gone back to acting recently with his recurring role as Joe Leonard in the Fox sitcom Last Man Standing.