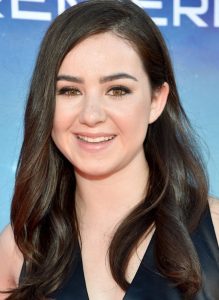 Sarah Gilman was born on January 18, 1996 in Los Angeles, California, USA. She started her acting career performing in theater. In 2011, she appeared in the short film Hold for Laughs. The following year, she made her television debut in an episode of Up All Night. Her first recurring role was as Cammy Harris in the Fox sitcom Last Man Standing.

At the same time, she appeared in an episode of Marvin Marvin and Kroll Show. From 2014 to 2015, she starred as Delia Delfano in the Disney Channel series I Didn’t Do It. After a guest role in an episode of Jessie, she landed the role of Velma Dinkley in the movie Daphne & Velma.