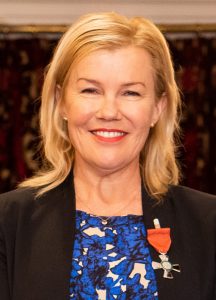 Robyn Malcolm is a New Zealand actress. She first appeared in an episode of Shark in the Park. She later made her film debut in Absent Without Leave. She then gained recognition for starring as Ellen Crozier in the television series Shortland Street. In the 2000s, she had performances in the films The Lord of the Rings: The Two Towers, Perfect Strangers, Boogeyman, and Sylvia. She also starred as Cheryl West in the TV series Outrageous Fortune. In the 2010s, she starred as Kirsty Corella in Rake, Anita in Top of the Lake, Anna Kingston in Agent Anna, and Julie Wheeler in Upper Middle Bogan. Her latest film role was in 2017’s Hostiles.