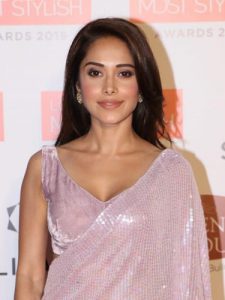 Bollywood star Nushrat Bharucha debuted in 2002, appearing in the television series Kittie Party. Later in 2006, she had her first movie role in Jai Santoshi Maa. Her next film role came in 2009 with Kal Kisne Dekha. For her role here, she was nominated for the Superstar of Tomorrow – Female at the Stardust Awards.

In 2010, she had a role in the Telugu film Taj Mahal, followed by another role in the Hindi film Love Sex Aur Dhokha. Her breakthrough role, however, was as Neha in 2011’s Pyaar Ka Punchnama, for which she was nominated for the Best Breakthrough Performance – Female at the Stardust Awards. She went on to star in the films Akaash Vani, Darr @ The Mall, and Meeruthiya Gangsters.

In 2015, the actress starred in Pyaar Ka Punchnama 2, for which she won some awards, including the Most Entertaining Actor in a Comedy Role – Female at the BIG Star Awards. After this, she made her Tamil debut in Vaaliba Raja. More recently, she had notable performances in the films Sonu Ke Titu Ki Sweety, Dream Girl, and Marjaavaan.

Nushrat Bharucha stays fit and healthy by sticking to a healthy diet plan. “I begin my day with one serving of collagen in water on an empty stomach to improve my skin’s elasticity and fight free radicals,” said the actress. She starts her day with “quinoa protein pancakes with seasonal fruits, or an egg frittata with a slice of wholewheat bread, green tea, and multivitamins.”

“Lunch and dinner are typically fi sh-lettuce wraps with loads of vegetables and a light vinaigrette dressing, or grilled lowfat cottage cheese with red rice and sautéed vegetables, or low-fat feta or steamed fish with bok choy and vegetables,” she continued. The actress also snacks healthily with chia smoothie with a few almonds or gluten-free protein bar or a sugar-free cake. She drinks as much as three liters of water daily and take Omega 3 supplements.