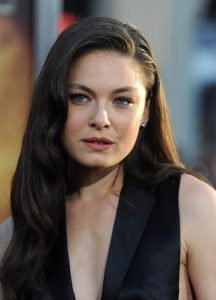 Alexa Davalos was born on May 28, 1982 in Paris, France. She spent her childhood in Italy and France before she settled in New York with her family. She moved out at age 17 and became a model, supporting herself through modeling jobs. She later became enchanted with acting and went on to attend Off Broadway Flea Theater in New York. She made her debut in 2002 in an uncredited role and unaired pilot.

Around the same time, she played the recurring part of Gwen Raiden on Angel. She also starred on the TV movie And Starring Pancho Villa as Himself. She then landed her first main role on the short-lived series Reunion, which aired on TV from 2005 to 2006. Before this, she had a role in the movie The Chronicles of Riddick. Her latest film is 2010’s Clash of the Titans while her latest work on TV is on The Man in the High Castle.