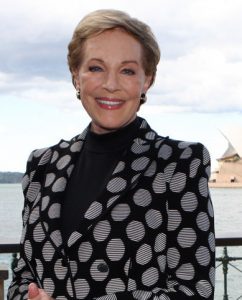 Julie Andrews is an English actress. She started her career as a child, first gaining recognition for her work in Broadway. In the 1960s, she made her film debut playing the titular character in 1964’s Mary Poppins. For her performance, she won an Academy Award for Best Actress. She next portrayed Maria von Trapp in 1965’s The Sound of Music and won a Golden Globe Award. The rest of the 1960s saw her perform in the films The Americanization of Emily, Hawaii, Torn Curtain, Thoroughly Modern Millie, and Star! She was made a Dame by Queen Elizabeth II in 2000 for her contribution in the performing arts. During this period, she also starred in Disney’s The Princess Diaries and its sequel The Princess Diaries 2: Royal Engagement. She’s also lent her voice for the animated movies Shrek and Despicable Me.