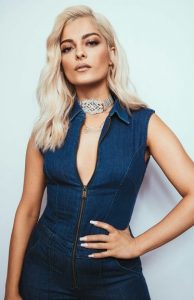 Bebe Rexha is an American singer-songwriter. She started her singing career by collaborating with other artists. This includes G-Eazy’s “Me, Myself & I” and David Guetta’s “Hey Mama”. As a songwriter, she wrote songs that were performed by such singers as Eminem and even Rihanna’s “The Monster”. She eventually pursued a solo career as a singer, releasing her first extended play I Don’t Wanna Grow Up in 2015. This was followed by her second EP All Your Fault: Pt. 1 with the lead single “I Got You”. Her third EP All Your Fault: Pt. 2 was released next with the hit song “Meant to Be”. She also released the single “No Broken Hearts”.