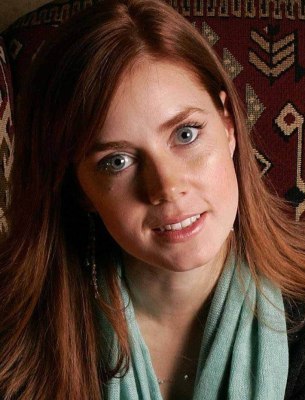 Amy Lou Adams was born on August 20, 1974 in Vicenza, Veneto, Italy to American parents Richard Kent and Kathryn Adams. Because of her father’s job, being a U.S. serviceman, she, along with the entire family moved from base to base until they settled in Castle Rock, Colorado when she was eight.

She attended Douglas County High School where she sang in the school choir and trained as an apprentice at a local dance company in the hopes of becoming a ballerina. Her parents had wanted her to pursue her athletic training to get a college scholarship, which she gave up to pursue dance instead.

Following her high school graduation, she moved to Atlanta with her mother and realizing that she was not talented and gifted enough to be a professional ballerina, she entered musical theatre. When she turned 18, she supported herself by working as a greeter at a Gap store while performing in community theatre.

She then started to work professionally as a dancer at Boulder’s Dinner Theatre and Country Dinner Playhouse and Heritage Square Music Hall. It was there that she was spotted by Michael Brindisi, a Minneapolis dinner theatre director, in 1995. She then moved to Minnesota where she worked at the Chanhassen Dinner Theatres for the next three years. In 1999, she auditioned for a role in the movie Drop Dead Gorgeous and landed the part of Leslie Miller, marking her film debut. After Drop Dead Gorgeous, she moved to Los Angeles with the persuasion of her co-star Kirstie Alley. In the early 2000s, she starred in small films such as Psycho Beach Party, Cruel Intentions 2 and The Slaughter Rule.

Around the same time, she also landed guest spots in such television shows as That ’70s Show, Charmed, Zoe, Duncan, Jack & Jane, Providence, Buffy the Vampire Slayer, Smallville and The West Wing. In 2002, she gained recognition for her role as Brenda Strong, the love interest of Leonardo Di Caprio’s character in Steven Spielberg’s Catch Me If You Can.

Her career breakthrough came in 2005 after being cast as Ashley Johnsten in the independent film Junebug. It premiered at the 2005 Sundance Film Festival where she also won a Special Jury Prize for her performance. After its theatrical release, Junebug garnered positive reviews from critics and Adams herself enjoyed a great deal of attention. For her performance, she received a Screen Actors Guild Award and an Academy Award nomination for Best Supporting Actress.

Adams’ critically acclaimed performance in Junebug helped her gain more movie roles, beginning with Talladega Nights: The Ballad of Ricky Bobby. She also made a guest appearance in the hit television series The Office. In 2007, she starred in the big-budget film Enchanted. She was picked to play the lead role of Giselle among other 300 actresses who auditioned for the part. In the late 2000s, she appeared in several feature films including Sunshine Cleaning, Night at the Museum: Battle of the Smithsonian, Julie & Julia, Moonlight Serenade and Leap Year. In 2010, she received an Academy Award nomination for Best Supporting Actress for her role in The Fighter.

The 39-year-old actress, with her beauty and talent, has been rumored to have gone under the knife for a nose job. Some beauty websites have written that Adams’ nose job was subtle and not too distinctive, which is a good thing.

While other actors’ physical transformation are shocking, Adams’ isn’t; simply because what the alleged nose job did to her face was just to give her the right facial proportions. If checked closely based on her old photos, her nose was slightly upturned with a sloped bridge, whereas now it appears straighter with a more even bridge.

The plastic surgery rumors didn’t affect her film career though. In 2013, she starred in the critically acclaimed movie Her, alongside Joaquin Phoenix, Rooney Mara, Olivia Wilde, and Scarlett Johansson. As of 2014, she has two projects in line – Lullaby and Big Eyes.

One thought on “Amy Adams Plastic Surgery Before and After”