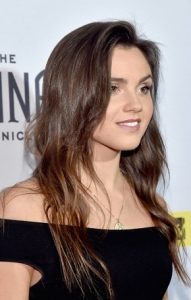 Poppy Drayton is a British actress. Her acting career started in the 2010s, making her television debut in the Hallmark made-for-television movie When Calls the Heart. She next made guest appearances in the shows Downton Abbey, Father Brown, Midsomer Murders, and Plebs. In 2014, she made her first movie appearance in Down Dog, followed by the films Unhallowed Ground and Writers Retreat. She then landed her first starring role on the small screen, playing Amberle Elessedil in the short-lived series The Shannara Chronicles. This year, she starred in the TV film Home by Spring and appeared as Elizabeth in the movie The Little Mermaid.