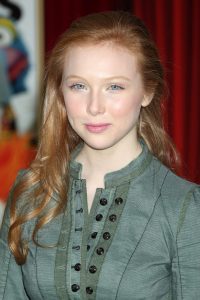 Hollywood star Molly Quinn had her career beginnings in the mid-2000s. She made her debut in the movie Walk Hard: The Dewey Cox Story. She next appeared in the films My One and Only and Disney’s A Christmas Carol. Her major breakthrough was after she landed the role of Alexis Castle in the ABC series Castle, a role she played from 2009 to 2016. Simultaneously, she starred in the Disney Channel Original Movie Avalon High.

She also voiced Princess Bloom in the animated show Winx Club. Apart from this, she continued her work on the big screen. She appeared in the movies The First Time, We’re the Millers, and Welcome to Happiness. She even co-starred in the film Hansel & Gretel Get Baked, which she also produced. More recently, she starred in the movies Last Rampage and Newly Single. In addition to her voice work credits, she’s also played Supergirl in Superman: Unbound.

The 24-year-old actress stays in shape and in good health by following a vegan lifestyle. She has been focusing on a plant-based diet since she was young. She was practically raised to not consume animal products. But she also admits that being able to follow this diet as part of her normal life is a journey. It’s not as easy as it seems. On her Twitter, she wrote: “I was raised lacto-ovo vegetarian then at 12 became lacto veg, then at 14 vegan 16 raw vegan now just vegan. Diet is a journey.”

On the other hand, she also doesn’t criticize other people for following different diet plans. She acknowledges the fact that veganism isn’t just for everyone. Every person has different nutritional needs and sometimes animal products are still crucial for one’s overall health. She explained: “I was raised vegetarian & I hope 2 always b. Just works 4 me, but it is not 4 everyone & I don’t judge.”