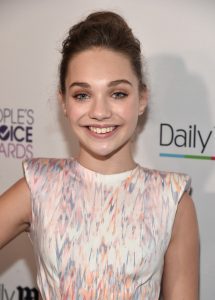 Maddie Ziegler is an American dancer. She’s also pursued acting. She first became known for appearing on the reality show Dance Moms. This started when she was eight. Her last appearance was in 2016. More recently, she came to prominence for starring in Sia’s music videos of the songs “Chandelier” and “Elastic Heart”, among others. In 2016, she was a judge on the reality show So You Think You Can Dance: The Next Generation. She also released her own memoir titled The Maddie Diaries. It became a New York Times Best Seller. This year, she made her big-screen debut in the movie The Book of Henry.