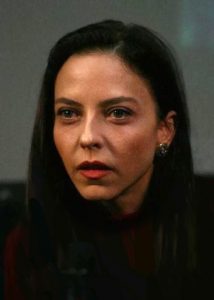 Juliet Landau is an American actress. She started her Hollywood career in the early 1990s. After appearing in the 1992 film Neon City, she gained recognition for her role as Loretta King in Tim Burton’s Ed Wood. She next had roles in the films Direct Hit, Theodore Rex, and Ravager. On television, she first became known for her role as Drusilla in Buffy the Vampire Slayer and its spin-off Angel. Also during this period, she had performances in the films Citizens, Toolbox Murders, Going Shopping, and Hack!, among others. She’s also a voice actress who’s worked in several animated films and shows. This year, she played the role of Cordelia in the new seris Claws.