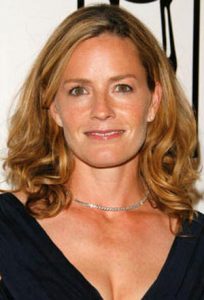 It was in 1982 that Hollywood star Elisabeth Shue started her career. She made her debut in the TV movie The Royal Romance of Charles and Diana. Her first main role on television was in Call to Glory. During the ’80s, she also had roles in the films The Karate Kid, Link, and Adventures in Babysitting.

She later became known for starring as Jennifer Parker in the movies Back to the Future Part II and Back to the Future Part III. Her role in the 1995 Leaving Las Vegas gained her an Oscar nomination for Best Actress. She later starred in the films Deconstructing Harry and The Saint. In the 2000s, she starred in Hollow Man, Hide and Seek, Dreamer, Hamlet 2, and Don McKay. She came to wider prominence in the 2010s courtesy of her role as Julie Finlay in CSI: Crime Scene Investigation. More recently, she starred in the movies Battle of the Sexes and Death Wish.

The actress may already be in her 50s, but it’s apparent that she still has a slender and fit body. What’s her secret? By keeping herself physically active on a regular basis. Firstly, it is important for her to meditate in order to lessen stress. She said: “I’ve been practicing and relying on Transcendental Meditation for those moments when I feel frantic or anxious. I just stop for 20 minutes to calm myself. I also unwind by hitting tennis balls.”

As for her workouts, she said she mostly relies on tennis in terms of staying fit and healthy overall. She explained: “Tennis has helped me through my midlife crises. It’s linear, and I can measure progress, plus it helps me focus. I love competing, love the challenge – pretty perfect. You have to be brave, and you can feel your personality come out on the court.”