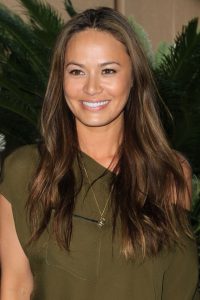 In 2002, actress Moon Bloodgood got her Hollywood start with a one-time role on Just Shoot Me! She later made her film debut with a small role in the 2004 romantic comedy film Win a Date with Tad Hamilton! She next guest-starred in an episode of Monk, as well as played the role of Bridget in the movie A Lot Like Love. She next had performances in the films Moonlight Serenade, Eight Below, Pathfinder, and What Just Happened. Back on television, she had her first starring role as Rita Shelten on the ABC series Day Break, which aired from 2006 to 2008.

Following this, she portrayed Detective Maya Sunee in the movie Street Fighter: The Legend of Chun-Li. She next played Lt. Blair Williams in 2009’s Terminator Salvation. She also starred on the short-lived show Journeyman. Also in 2009, she had a three-episode role as Detective Michelle Paxson on Burn Notice. In the 2010s, she became best known for her role as Anne Glass on Falling Skies, which aired on television from 2011 to 2015. She has also had roles in the films Faster, Bedrooms, Beautiful Boy, Conception, The Sessions, and The Power of Few. More recently, she starred as Rox Valenzuela on the CBS series Code Black.

The actress follows an active lifestyle not just to maintain a healthy weight but to also feel awesome from the inside out. Prior to acting, she was a professional dancer so her discipline when it comes to her fitness has already been established. While she loves to exercise and get physical, she also continues to explore other physical alternatives for her body.

“Right now, I’ve been working out with a masseuse. My back’s been tense lately because I used to be a professional dancer. Jazz, hip-hop, ballet, all of that,” said the actress when asked if she hits the gym regularly. “When I was 17, I was a Lakers Girl; I was the youngest girl on the squad. I’ve always been into sports and being physical.”