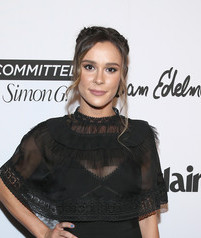 Bella Dayne is a German actress. She started her acting career in the 2010s, debuting in an episode of American Horror Story in 2012. That same year, she had her first movie role in Yellow. She later had one-time appearances in the shows The Goldbergs and Person of Interest. In 2016, she appeared as Delphine in several episodes of the British series Plebs. She also guest-starred in The Man in the High Castle, and played recurring character Astrid in Humans. Her first lead role was as Helen of Troy in Troy: Fall of a City. This year, she played Red Spear in the new Netflix series Cursed.