Anne Jacqueline Hathaway was born on November 12, 1982 in Brooklyn, New York City, New York to lawyer Gerald Thomas Hathaway and actress Kathleen Ann, who inspired Hathaway to follow in her footsteps. Her mother played Fantine in the first US tour of Les Misérables. Their family, then, moved to Millburn, New Jersey, where she was raised.

She was raised Roman Catholic and wanted to be a nun during her childhood. She, however, decided against it at age 15, after learning that her brother Michael was gay. She then studied at Brooklyn Heights Montessori School and Wyoming Elementary School in Millburn. She graduated from Millburn High School where she acted in several school plays.

She also performed in the productions of Jane Eyre and Gigi at New Jersey’s Paper Mill Playhouse. She went on to major in English at Vassar College in Poughkeepsie, New York. She later transferred to New York University’s Gallatin School of Individualized Study. She also took classes at the American Academy of Dramatic Arts. 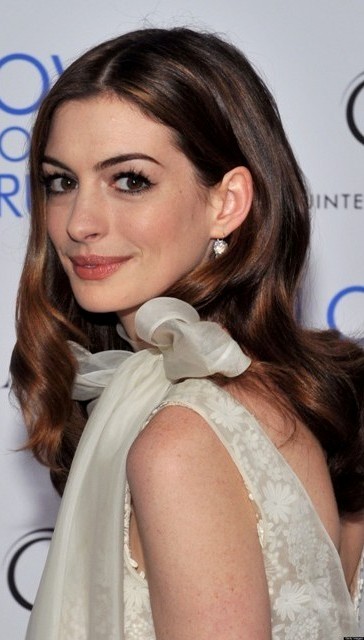 Also a soprano, she performed with the All-Eastern U.S. High School Honors Chorus at Carnegie Hall twice; in 1998 and 1999. She has also performed in plays Seton Hall Preparatory School in West Orange, New Jersey. At the age of 16, three days after her performance at Carnegie Hall, she was cast in the short-lived television series Get Real.

In 2001, she was first cast in the drama film The Other Side of Heaven. Before production of this film, she was also cast as Mia Thermopolis in Disney’s The Princess Diaries. She auditioned for the role during a flight layover in New Zealand and was cast just after one audition, winning the role over 500 other girls.

She continued to appear in family-oriented movies, becoming known in mainstream media as a children’s role model. In 2002, she starred in Nicholas Nickleby, followed by Deseret News and Ella Enchanted. She was also cast as Christine Daaé in Joel Schumacher’s Phantom of the Opera but had to drop out due to schedule conflicts with The Princess Diaries 2: Royal Engagement. She was replaced by Emmy Rossum.

Following The Princess Diaries 2, Hathaway started appearing in dramatic roles beginning with the 2005 crime drama film Havoc. The film was not well-received and was not given a theatre release in the United States. That same year, she starred in Ang Lees’s Brokeback Mountain, which won rave reviews and received multiple Academy Award nominations.

The following year, she starred in the comedy film The Devil Wears Prada alongside her idol Meryl Streep. She was then cast in the 2007 comedy film Knockep Up, though she dropped out before filming started and was replaced by Katherine Heigl. She instead starred in the 2007 drama Becoming Jane, in which she portrayed English writer Jane Austen. Her success on the big screen continued after starring as Agent 99 in Get Smart opposite Steve Carell and Alan Arkin, which became a box office hit. Also in 2008, she starred as Kym in the drama Rachel Getting Married, which premiered at the 2008 Venice and Toronto Film Festivals. The film garnered widespread critical acclaim and Hathaway was nominated for an Oscar for Best Actress.

In 2010, she portrayed the White Queen in Tim Burton’s Alice in Wonderland and Through the Looking-Glass alongside Helena Bonham Carter and Johnny Depp. She was then cast as Selina Kyle in Christopher Nolan’s final installment in his Batman film trilogy, The Dark Knight Rises. The film garnered positive reviews and grossed over $1.081 billion worldwide, which became the third highest-grossing film of 2012.

That same year, she played Fantine in the film adaptation of the musical Les Misérables. For the role, the actress lost weight and had her long hair cut short on camera. For her performance, she received rave reviews and went on to win the Academy Award, Golden Globe, Screen Actors Guild Award and BAFTA Award for Best Supporting Actress.

The 31-year-old actress is undeniably charming and her sex appeal seems to be even greater as she ages, so to hear claims that she has had plastic surgery seems unbelievable. However, claims on the internet that the actress has had something done to refine her nose, as well as improve her breast cup size are persistent and strong.

According to reports, Hathaway has had a nose job to give her nose a slimmer look. The difference not being so distinct makes her transformation even more subtle, which is how it should be done. Simply put, if ever the actress did go under the knife, it was a good feat because she looks even better without any trace of the transformation.

Aside from her nose, the actress has also undergone breast implants. Just like her nose, the change on her chest is subtle, not the kind of transformation that calls for any mainstream attention. So, with this, Hathaway should be lauded for knowing the right amount of improvement that suits her face and body.