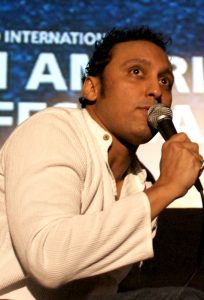 Aasif Mandvi is a British-American actor. He debuted in an episode of Miami Vice back in 1988. Later in 1990, he made his film debut in No Retreat, No Surrender 3: Blood Brothers. He next had roles in the movies Die Hard with a Vengeance, Eddie, Analyze This, and The Siege. In the 2000s, he had performances in the films 3 A.M., The Mystic Masseur, Undermind, Spider-Man 2, Freedomland, Music and Lyrics, Ghost Town, and The Proposal. Between 2006 and 2008, he played Dr. Kenchy Dhuwalia in the TV series Jericho. From 2006 to 2015, he starred as himself in The Daily Show. In the 2010s, Mandvi had performances in the films The Last Airbender, Premium Rush, The Dictator, Ruby Sparks, and The Internship. He currently stars in the TV shows This Way Up and Evil.