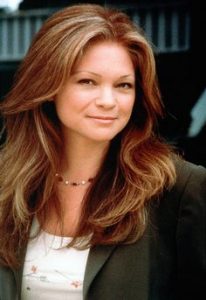 Valerie Bertinelli is an American actress. Her acting career started in the 1970s. She got her first break playing the role of Barbara Cooper Royer on the sitcom One Day at a Time. The show aired from 1975–1984. She won a Golden Globe for Best Supporting Actress for her role. She then made her movie debut in 1979’s C.H.O.M.P.S. In the 1980s, she starred on a couple of TV movies. She also starred in the films Ordinary Heroes and Number One with a Bullet. In the ’90s, she starred on the TV shows Café Americain and Touched by an Angel. From 2010 to 2015, she starred as Melanie Moretti on Hot in Cleveland.