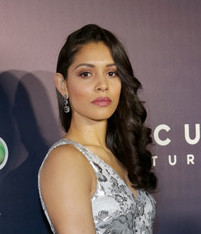 Miranda Rae Mayo was born on August 14, 1990 in Fresno, California, U.S. She started acting by performing in local stage productions. She moved to Los Angeles where she initially worked as a model before finally venturing into acting. In 2011, she made her television debut in an episode of Law & Order: LA. That same year, she had her first movie role in Inside.

Later in 2013, she had a recurring character as Patreece Sheibani in the TV series The Game. She next had a brief role in the film We Are Your Friends. She then gained notice for her role as Zoe Browning in the soap opera Days of Our Lives. In 2015, Mayo played Talia Sandoval in several episodes of Pretty Little Liars, as well as starred as Lacey Briggs in the short-lived series Blood & Oil. Her breakthrough role came as Stella Kidd in Chicago Fire.