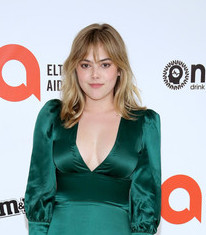 McKaley Miller is an American actress. She debuted in 2006, appearing in the TV film Inspector Mom. Later in 2010, she played recurring role Dana Monohan in the ABC series The Gates. She next appeared as Talia in 3 episodes of Wizards of Waverly Place. Between 2011 and 2015, Miller became known for her recurring character as Rose Hattenbarger in Hart of Dixie. She next had performances in the films General Education, The Iceman, and Where Hope Grows. In 2014, she starred as Lizzie Braddock in the short-lived series Partners. Afterward, the actress had notable guest roles in Scream Queens, Faking It, and Speechless. Her most work on television was in an episode of 9-1-1: Lone Star.