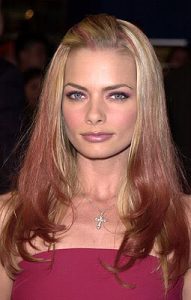 Jaime Pressly is an American actress and model. She first gained notice for starring in the film Poison Ivy: The New Seduction in the 1990s. In the 2000s, she had notable roles in the films Not Another Teen Movie, DOA: Dead or Alive, and I Love You, Man. On television, she had main roles on the TV shows Push and Jack & Jill. Her TV breakthrough was as Joy Turner on My Name Is Earl. For her work here, she won an Emmy for Best Actress in Comedy. She returned to being a main cast on I Hate My Teenage Daughter. She currently stars on the sitcom Mom.