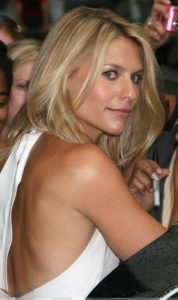 Hollywood star Claire Danes had her career beginnings in the mid-1990s. Her debut was as Beth March in the 1994 film adaptation Little Women. Afterwards, she became known for starring as Angela Chase on the TV series My So-Called Life. She made her major breakthrough as Juliet Capulet in Romeo + Juliet. She next starred as Cosette in Les Misérables. In the 2000s, she starred in several major films. This includes Igby Goes Down, Terminator 3: Rise of the Machines, Stage Beauty, Shopgirl, Stardust, and Me and Orson Welles. She then played the titular character in the TV film Temple Grandin. This won her a Primetime Emmy Award. Since 2011, she stars as Carrie Mathison on the TV series Homeland. She’s also won several awards for her portrayal of the lead. This year, she starred in the film Brigsby Bear.

The 38-year-old actress and mother of one keeps her body fit and healthy by keeping things in her lifestyle clean and balanced. While she can be frequently seen by the paparazzi going for a run, she also works in the gym with a trainer. Her trainer, Joe Dowdell, also shared how he doesn’t persuade Claire to tire herself too much from working out, saying doing cardio thrice every week is already healthy enough. Her trainer was noted for saying that going to extremes is not recommended.

The actress also admits to using workouts as means of releasing stress. In fact, exercise has helped Claire deal with the emotional turmoil as a result of a break-up with a longtime boyfriend before. This also was the beginning of her being more devoted in her exercise regimen. From this point forward, she realized what exercise is really capable of bringing into someone’s life. When asked on the red carpet what her secrets are to keeping in shape, the Homeland star answered her secrets aren’t really secrets, because they’re “annoyingly obvious.”