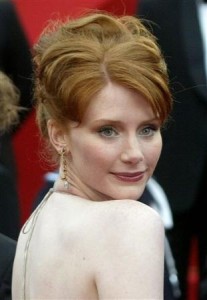 Bryce Dallas Howard is an American actress who was able to establish her career and gained fame in her own right despite having Ron Howard, an award-winning director, as her father. Her major breakthrough was when she starred in The Village, which has since become a cult film. Her performance in the said movie was well-received, proving she really has a knack for acting. She next starred in Lady in the Water, which was less successful. She worked on more mainstream films with her roles in Spider-Man 3, Terminator Salvation and The Twilight Saga: Eclipse. She recently played the female lead in the box office success Jurassic World. Her father, Ron Howard, is worth $140 million.