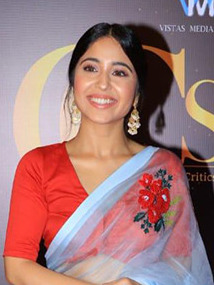 Shweta Tripathi is an Indian actress. In 2009, she made her acting debut in the television series Kya Mast Hai Life. She later made her film debut in Trishna. She was then noticed for her performance in 2015’s Masaan, which got her the Zee Cine Awards for Best Actress In A Supporting Role. She later appeared in the film Haraamkhor. Following this, she starred in the Prime Video series Mirzapur. She went on to star in the film Gone Kesh. In 2019, she made her Tamil debut in Mehandi Circus. This year, she had performances in the Netflix movies Raat Akeli Hai and Cargo. She also had a role in the web series Laakhon Mein Ek.